One simple trick to improve the motor acoustic classifier

Posted by: Chengwei 5 years, 3 months ago

Enough for the theory, let’s take a look at it visually.

In order to extract MFCC feature from our audio data, we are going to use the Python librosa library.

First, install it with pip

We are going to use a siren sound WAV file for the demo. Download the siren_mfcc_demo.wav from the Github here and put in your directory

In a Python console/notebook, let’s import what we need first

Then let’s extract the MFCC features

feature_normalize function is same as the last post, which normalizes the audio time series to be around 0 and have standard deviation 1. 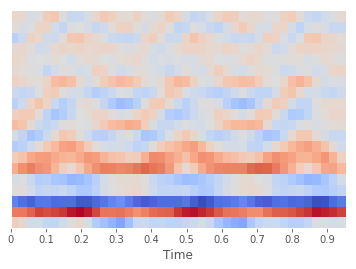 This is the MFCC feature of the first second for the siren WAV file. The X-axis is time, it has been divided into 41 frames, and the Y-axis is the 20 bands. Did you notice any patterns in the graph? We will teach our model to see this pattern as well later.

For the complete source code, check out my updated GitHub. Feel free to leave a comment if you have a question.